Hitler was shot in his privates? 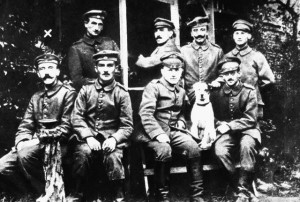 That Hitler was monochromatic (had one testicle) is a common misconception that had its roots in the fact that he was wounded in the leg during WW I. He was a runner in the war, carrying messages from the command tent to the front line. Some Internet sites insist that Hitler was shot in his private parts, going so far as quoting stretcher-bearers who dubbed him, The Screamer. Such claims say he repeatedly beseeched the medical corps, Will I ever be able to have children? Hitler had at least three subsequent medical exams and was hospitalized as a result of a mustard gas attack near the end of the war. None of the exams reflect his missing any body parts, and serious biographers discount the dubious claims. It was Herman Goring, one of the earliest notable adherents to the Nazi cause, (he had been an ace pilot in WW I) who was shot in one of his eggs during the Beer Hall Putsch. Goring eventually became a morphine addict and he ballooned up to a rotund figure. 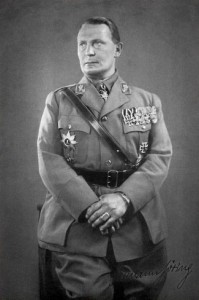 Footnote to History: Herman Goring (eventually Commander-in-Chief of the Luftwaffe) designed his own uniforms. He may have profited more than any from National Socialism, including hording priceless works of art and commandeering a number of palaces and castles throughout Europe. While tried and given the death penalty at Nuremburg, he managed to commit suicide by taking cyanide hours before being hung. How Goring obtained the poison was a mystery until 2011. Seventy-eight year-old Herbert Lee Stivers of California, a US private guarding him, admitted he was duped into believing he was sneaking him a home remedy to help his stomach pains.