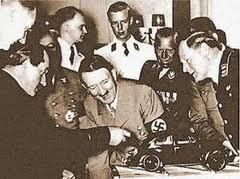 Ferdinand Porsche shows off "The Peoples Car"
Adolph Hitler was a well-known doodler. He made his meager living in Munich as a street artist selling his work to tourists. It is alleged when seated in a Munich café, Hitler drew the rough sketch of the VW Beetle. Urban legend? Actually, most sources say Hitler contracted Ferdinand Porsche -who drew the sketch -and ordered him to do the basic design of the car. 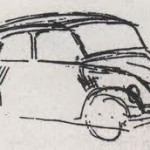 Porsche's original design sketch
Another legend has it that when Porsche presented his sketch of the car, Hitler was unhappy and grabbed a notepad, dashed off his own sketch, and is reported to have said, "It should look like a beetle, you've only got to look to nature to find out what streamlining is."

Said to be Hitler's "improved design"
Hitler's specifications were very exact. The name he gave to the car was Kraft durch Freude Auto (meaning 'strength through joy car'). Hitler met with Ferdinand Porsche as well as the folks at Daimler-Benz to develop this "People's Car" (Volkswagen). 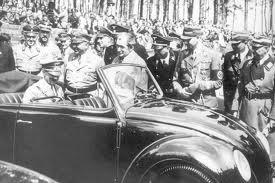 Hitler, while a automotive enthusiast, he never drove a car during his lifetime
Hitler insisted that the car transport two adults and three children and that it reach speed of at least 62 miles an hour (100 k) so it could travel on the new Autobahn system. It was Hitler who also insisted the car be built on the Henry Ford model of the modern assembly line. 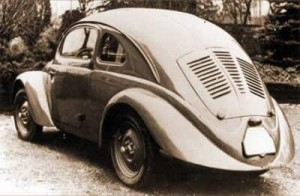 Porsche turned the garage in his home into a design workshop. The work on the Beetle was only momentarily interrupted when his business manager (who was Jewish) was forced to flee the country. The Nazis developed a scheme some say duped the German people into investing into war production. Families were encouraged to deposit 32 Reichsmarks a week into a fund. When they amassed 1000 RM, they would take delivery of a Beetle. Well don't you know it, the plant was converted to rearmament and no one but the Nazi elite got a single car. Germans brought suit against VW to get the cars they had ordered and paid for, but the far reaching and impartial courts of Germany determined that the manufacturer did not have to deliver on its promise.