Hitler was a failed painter? 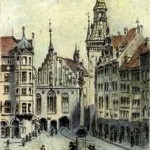 True. Growing up, Hitler imagined himself becoming one of the world's great painters. However, in October of 1907 at age eighteen, Hitler was rejected when he applied for entry to the Vienna School of Fine Arts. 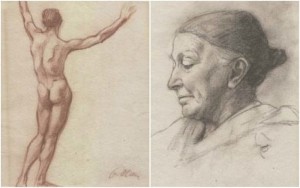 What may be Hitler's entry sketches to art school
He had arrived in the city with piles of his paintings and (along with 113 other candidates) submitted what he thought were his best works. He was one of 80 applicants allowed to take the exam, but he was not one of the 28 accepted. Hitler was furious and according to his roommate at the time, Gustl Kubizek (a music student), he stormed around the one-room flat for almost a day, ranting. 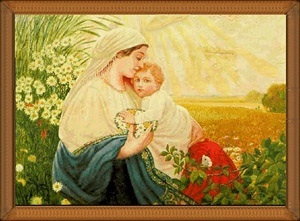 Later, he seemed to have been granted an interview with the rector of the school and was told that while he had little skill in capturing the human form, he may have a future in architecture. One quote that survives from the test is... "Test drawings unsatisfactory, few heads."

Footnote to History: Gustl Kubizek, Hitler's roommate during his early years in Vienna, believed to his dying day that had Hitler been accepted to art school, he would have never become the embittered dictator responsible for the death of millions later in life.   The paintings above are thought to be done by Adolf Hitler. From top: