Hitler was a draft dodger? 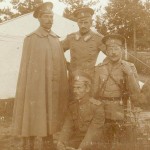 As the First World War was looming, Hitler did not, as required by law, register with the Austrian Government for the draft. It may be no coincidence that he left Vienna for Munich shortly before his draft noticed arrived. The Austrian authorities tracked him to Munich and while they could have imprisoned him and charged a hefty fine, they paid for his trip back to Austria, where he was proven to be unfit for active duty. 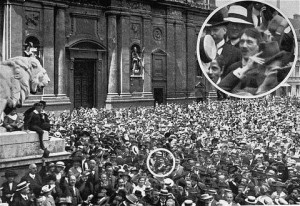 By the time war was announced in Munich, however, Hitler was an enthusiastic recruit. Most biographers assume Hilter had no interest fighting with his home nation as the Austro Hungarian Empire (and the army) was made us of many nations and peoples Hitler found inferior races. Footnote to History: The photographer (Heinrich Hoffman) later debunked the photo above with the zoom-in of Hitler in the Jubilant crowd at the announcement of World War I in Munich’s Odeonsplatz. Hoffman became Hitler's official photographer and a key propagandist. At his Nuremburg trial he admitted he faked the photo, which was used heavily in the propaganda of the Nazis.