Not Really. It was Konrad Adenauer, Mayor of Cologne, who dedicated the first section of road in 1929, four years before Hitler came to power. This is particularly poignant since Adenauer wound up in a concentration camp and after the war became the first West German Chancellor (1949 until 1963). It must be noted however, Hitler and the Nazis greatly expanded this program. Along with rearmament (illegal under the Treaty of Versailles) and massive construction projects (Many buildings still stand in Munich), the Nazis returned millions of unemployed into the workforce. 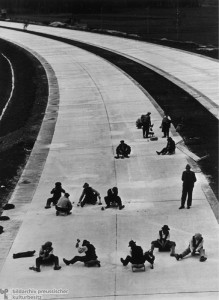